I'm back from London and starting to get over the jet lag. Sector 25 was an amazing gift of a weekend from Fanderson, the Gerry Anderson Fan Appreciation Society. Mike and I spent most of the weekend in the hotel bar, signing copies of The Future was FAB, as evidenced below. 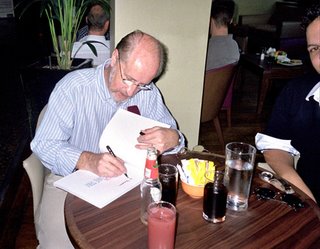 All told, Fanderson sales moved about 60 or 70 copies of the book over the weekend, and had a record breaking £5,000.00 in overall sales. Mike and I enjoyed signing every one of the books, and seeing a hotel full of people walking around with copies.
My heartfelt thanks go to Stephen La Riviere for picking me up at the airport, lugging me all over London and Borehamwood and finally back to Gatwick so I could catch my plane home last Thursday. Thanks also to Chris Bentley, Martin Gainsford, Marcus Hearn, Len, Stephen, Nick, Ralph, and the rest of the Fanderson committee for doing an outstanding job in organizing the convention, and for their excellent hospitality. I'm looking forward to the next convention, hopefully in 2008. 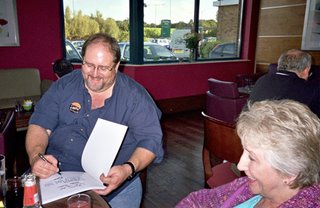 I had a wonderful time meeting so many new friends at Sector 25, as well as seeing some old ones. More thanks to James, Duncan (who shot the photos in this entry), Louise, Ralph, Richard, Aimee, Tamsin, Hilton, Elliott, Mark, Sam, Tony, Tony, Tony, (sounds like a hip hop group) Chris, and especially Mike and Linda Trim (Linda's in the photo with me) for making the weekend very special for me.
For more photos of the models and puppets on display at Sector 25, take a look at the message boards at FABGearusa.com.
Posted by A. Taylor at 12:20 PM