Keeping Up With The Dickens 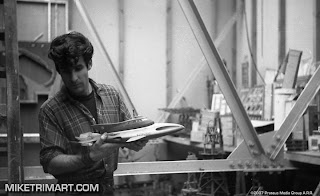 Sorry, I'm late again getting a new image up and you must be starting to doubt my commitment to this little project. Fear not, I've returned and with a wonderful photo (shot by Mike) of fellow model shop "new hire" Roger Dicken and Stingray! Roger and Mike answered the same newspaper advertisement and were hired to work in the shop on the same day. Click the picture to enlarge it.
The company was just winding down post production on Stingray, but the boys were hired to start pre-production on Thunderbirds. This photo must have been shot fairly soon after Mike and Roger (and James Channing as well) were hired, as one of the Stingray models was obviously still laying about the shop. Another photo from this sequence (with both Mike and Roger holding the model) did make it into The Future was FAB: The Art of Mike Trim and appears on page 20.
Roger went on to be nominated for an Academy award for Best Special Effects in 1970 (along with Jim Danforth) for When Dinosaurs Ruled The Earth. They lost to Bedknobs and Broomsticks!
Roger also worked on 2001: A Space Odyssey and Alien, for which he created the facehugger and other creepy creature effects.

San Diego Comic Con is fast approaching, and I'll be at the Hermes Press booth signing copies of the book again this year. The convention runs from July 25th through July 30th at the San Diego Convention Center. Here's the convention's website:
http://www.comic-con.org/cci/
Check back here for a booth number; I'll post it as soon as I find out what it is. Hope to see some old friends there and make some new ones. Please do say hello if you're going to be there!
Posted by A. Taylor at 3:09 PM