Ever been to England? October's a little cold and wet, but it's a great time to make the trip if you're a Mike Trim fan. Mike (and I) will be appearing at the Fanderson Sector 25 Convention, October 7 & 8, at the Holiday Inn - Elstree in Borehamwood (right next to the film studio). Not that both of us appearing and signing copies of the book isn't remarkable enough, but if you truly need more to get you on a plane, in a car, on the back of an Ostrich... whatever it takes to get to the convention... Mike will be bringing the surviving artwork from his days as a designer on Thunderbirds, Captain Scarlet, Joe 90, The Secret Service, Doppleganger, and UFO with him to display! Look, here's a piece now: 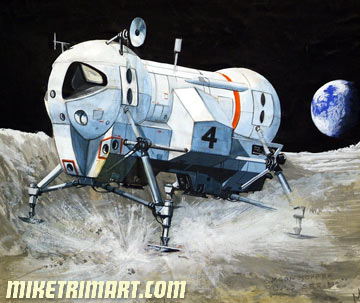 Of course, most of this art appears in The Future was FAB: The Art of Mike Trim, but there's nothing like seeing it in person. I'm sure it will be displayed in such a manner that touching it will be out of the question, but attendees will be able to get very close to the art and examine it in detail.
For most people, this is a once in a lifetime opportunity to see Mike's original designs - don't miss it!
There'll be plenty of original models, props, costumes and other widgets on display as well - well worth a look for fans of the series. If you've never been to a Fanderson convention to see these items in person, what's holding you back? Expensive airfare? Saving for a rainy day? C'mon, if this stuff is important to you - if it fills you with a sense of wonder and excitement that makes you feel like a kid again - don't you owe yourself the experience?
Other guests include Gerry Anderson himself, Nick Tate and Zienia Merton from Space: 1999, Shane Rimmer, Dominic Lavery, Francis (Captain Scarlet) Matthews, Art director Keith Wilson, and plenty more.
Hope to see you there!
Posted by A. Taylor at 2:54 PM No comments: