Here's a couple of concept renderings by Mike in marker for the Telehandler, a vehicle that doesn't seem to have made it into Thunderbird 2's hangar area in the film. 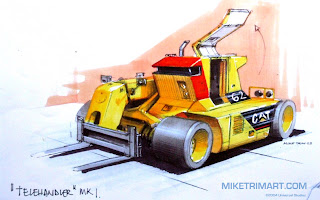 The Mark 1 version may have included the Caterpillar graphics as an attempt to lure the company into paying some money for product placement in the film, or to try and entice them into making the vehicle for the production company. Working Title created a partnership with Ford to create FAB 1 and featured other Ford products in the film, so this is a fairly likely assumption. 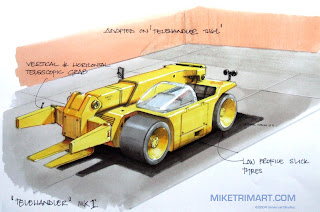 Mark 2 has been streamlined and the CAT graphics have been removed. The forward windscreen is reminiscent of Grand Prix racing vehicles of the 1960's, though I'm guessing the Telehandler would never make much speed. More likely, the windscreen was designed this way in order to feature the performer driving the vehicle.
I've looked through Thunderbirds: The Making of the Movie by Andrew Darling and can't find any shots of this vehicle from the film, so I'm guessing it was abandoned in the concept stage. Anyone have proof otherwise?

By the way, I came across the FIREFLY art below in the Darling book, so it was definitely from Mike's work on the film.
Posted by A. Taylor at 11:12 AM No comments: