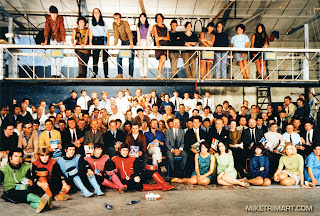 This week's image that didn't make it into The Future was FAB: The Art of Mike Trim is the full crew photo from Captain Scarlet. The entire crew of Thunderbirds had gathered for a black and white group photograph during production of the series, and it proved a very popular image with all involved. A year or two later, everyone (sans Gerry and Sylvia this time, for some reason) posed for a color shot to commemorate the production of Captain Scarlet.
Mike Trim can be seen in the rear, beneath the puppet bridge. I've added a red arrow pointing him out. Click on the image to see it larger, of course.
Posed in front wearing Spectrum finery is The Spectrum themselves, the pop group that recorded the music for the closing credits of the show.
Many thanks to Chris Bentley of Fanderson for an enormous gaggle of images he sent me for use in the book. This came from the Fanderson archives.
Posted by A. Taylor at 10:45 PM No comments: