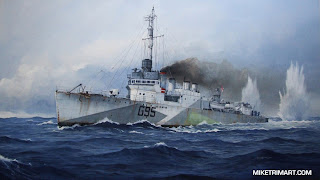 In 2010, Mike Trim completed a series of illustrations for Hornby Hobbies, which would find their way onto model kit boxes released by the Airfix Company. I'll try and post a new one at least once a week until I run out.

First up is the HMS Montgomery, above. Mike had this to say about it:
"HMS Montgomery, formally the US Destroyer USS Wickes, she gave her name to a whole class of flush-deckers. Commissioned into the Royal Navy in 1940, she served with distinction escorting numerous convoys with the 7th Escort Group, mainly in the Atlantic. Shown discharging depth charges. As with all the artwork, this was done using Gouache Designer's Colour and coloured pencils."