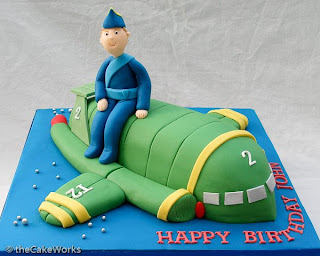 Mike Trim turns 65 today (August 26)! To celebrate, Mike's finally shucked his Luddite ways and bought a computer for the house. Hopefully this will result in more frequent updates of this blog.

The FAB TB2 cake above is from The Cake Works in Darlington Co., Durham. Do give them a shout if you need a cake and are in the area, they do lovely work.

Here's a pretty sweet fan film created by a couple of Irish fellows. Obviously a labour of love, and with very little budget, they've managed to create a more watchable adventure than the 2004 feature film, though I have a new appreciation of Fermat's acting abilities now. Russell Brand for Scott if this goes viral and gets optioned for the big screen!
Yes, that *IS* Shane Rimmer voicing Jeff Tracy in the introduction and epilogue, and doing a fine job.