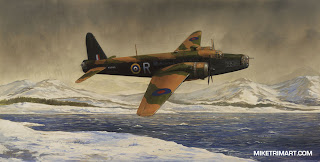 Third in the Model Box Art Series! Mike has this to say about it:

Vickers Wellington Mk1c, the WW2 bomber designed by Barnes Wallis (of Dambusters Bouncing Bomb fame) which was the mainstay of Bomber Command until the arrival of the big four-engined heavies.  The illustration shows N2980 on her fateful flight in December 1940. Having developed engine trouble she ditched into Loch Ness, although almost all of the crew escaped.  Discovered in 1976 on the bottom of the Loch, she was successfully salvaged in 1985 and is currently being rebuilt.

As always, here's a link to see the finished box and purchase the model.