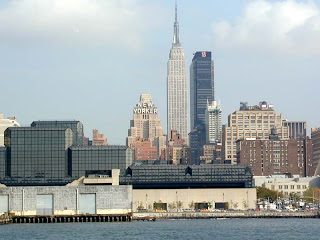 The photo above shows the Jacob Javits Center, the New Yorker Hotel, and the Empire State Building. I've just returned from spending several days in two of those places - didn't get to the ESB this trip. The New York Comic Con was a much better experience this year than last; at least I was able to get inside for all three days. Last year, the Fire Marshal shut the doors at around 2 p.m. on Saturday, causing a giant logjam of frustrated fanboys unable to get their four-color fix... me among them. 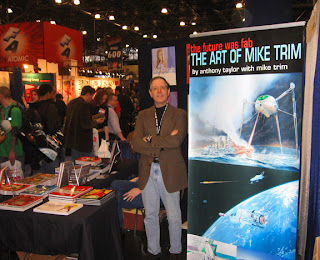 I was there to sign copies of The Future Was FAB: The Art of Mike Trim, and enjoyed spending time with Hermes Press Publishers Dan Herman and Louise Geer in the booth (that's Dan above), as well as meeting fans of Mike's work. It was very cool to meet fellow HP author Ron Goulart who made an appearance on Saturday to sign his new book on the pulps. I've been a fan of Ron's work since I was very young and read his novel, "Nemo," as well as his Vampirella and The Shadow books. Ron's written more adventurous prose than just about anyone on Earth, and he was a truly nice fellow as well.

I also had a fun and productive time with Christopher Jones and Melissa Kaercher, my friends from Minnesota. Chris is one of the most talented artists in comics today, and we're working together on a graphic novel. It was great to be able to hammer out some details of the project in person, and we hope to have the book out sometime early next year. It's a period mystery, set in Hollywood in 1966 - lots of pop art atmosphere along with some noir-ish touches. I'll post more details in the future.


One of the coolest things about my trip was staying in the New Yorker, the hotel where mysterious genious Nikola Tesla spent his last years, and died in 1943.

If it weren't for Tesla, we'd most likely be sitting around making blog posts on difference engines by the glow of gaslight; he worked out the power delivery system that brings electricity into our homes. He most likely worked out a great deal more than that, things that may take years or centuries for us to rediscover. To say that he was eccentric and a bit troubled is an understatement. The plaque above is affixed to the New Yorker on the 34th Street side, commemorating his residence there.