Still Nerdy after all those Academy Awards 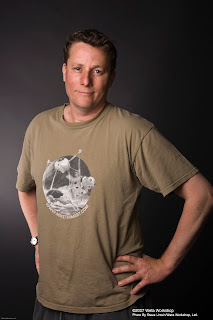 Richard Taylor sent me this photo today. He's wearing the Miketrimart.com t-shirt I gave him last year at the San Diego Comic Con. Richard is of course the owner of Weta Workshop along with Tania Roger, Jamey Selkirk, and Peter Jackson. He also wrote the foreword for The Future was FAB: The Art of Mike Trim.
The funny bit about this is that I saw another photo from this shoot which was released by Weta Workshop as an official press image in which the t-shirt was partly visible. Richard's been doing his part to get the word out about Mike's work!
Alas, the t-shirts aren't available for sale, they were promotional only.
Posted by A. Taylor at 3:59 PM 1 comment: