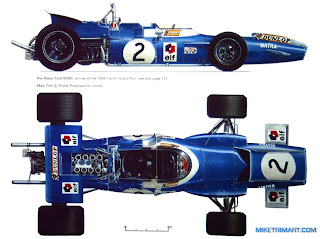 This is an illustration Mike Trim created for Profile Publications in the early 1970's of the Ford MS 80 racecar. This car won the French Grand Prix in 1969, driven by Jackie Stewart of Team Matra-Ford. Here's a link to a photo of Stewart's car during an earlier 1969 race, the Nurburgring.
No new image next weekend as I'll be in Louisville at Wonderfest, but check back and I'll try to get one up as soon as I return.
Have a great Memorial Day!
Anthony
Posted by A. Taylor at 1:04 PM