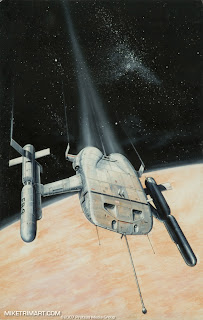 Another week, another piece of art that didn't make it into The Future was FAB: The Art of Mike Trim.
This is one of the sample pieces Mike did when he decided to go freelance in 1973. Given his earlier science fiction experience, he imagined he'd end up doing a lot of that sort of work. As it was, Mike did very little Sci-Fi work during his years as an illustrator. This led to an increasing sense of frustration and the eventual emergence of The Unknown project in the late '80's. This was an original stab at a sci-fi themed puppet production Mike developed with his friend and former student, Mark Munroe. The project remains unfinished.
Click on any of these images to make them bigger. You knew that, didn't you?
Posted by A. Taylor at 12:39 AM